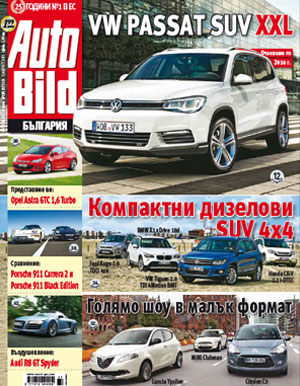 In 2002 our team launched the first official Bulgarian issue of the world’s biggest car magazine AUTO BILD based on a license contract with the Axel Springer publishing house, one of the largest media groups in Europe.

After a successful breakthrough on the Bulgarian market the monthly magazine reached in just two years the break even and become the market leader in the car segment. In 2006 AUTO BILD Bulgaria was integrated in the portfolio of the Newspaper Group Bulgaria, owned by the German media group Westdeutsche Allgemeine Zeitung (WAZ). As the managing director responsible for license projects and head of the editorial staff Ralf Petrov continue to be responsible for AUTO BILD Bulgaria.

Over the years the frequency of AUTO BILD Bulgaria changed from a monthly magazine to a bi-weekly and since 2009 to a weekly publication that is still valid today. At the same time we launched also the line extension for cars with all-wheel drive AUTO BILD Bulgaria 4x4 known in Germany as AUTO BILD Allrad.